The International Alliance for Fraternal Assistance (IAFA) works tirelessly to support the brave Ukrainian patriots who defend Ukraine in the Donbass. Each week they collect goods and supplies in Kyiv and deliver them to volunteer combatants in the eastern Ukrainian war zone.

At the end of 2014, Viktoria Woronovych and Yurii Mosin, co-founders and co-directors of IAFA, met Vasyl “Kavkaz” Zadrozhny, a medic in the Pyrohova Medical Battalion. Kavkaz was not only a committed Ukrainian patriot, social activist, and participant in the Revolution of Dignity (Maidan), but also the father of 12 foster children in his home town of Lviv. He was full of life and hope for the future. 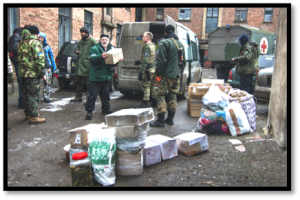 In February 2015, as Viktoria and Yurii were delivering supplies near Debaltseve, Russian troops surged into the city. Despite the fighting, Kavkaz and several fellow combatants rendezvoused with the IAFA team to receive their weekly supply of food, medical & other supplies. With the fighting increasingly fierce, some of the soldiers decided to spend the night before returning to the front line, but Kavkaz decided he was needed and should return immediately. Even though he was driving an ambulance, clearly marked with the internationally recognized white cross, he was shelled by the Russian troops and killed on the spot. Weeks passed before his body was found.

Kavkaz is one of our fallen heroes. However, there are thousands that still need our support. With the world news media attention being focused on other issues and no longer reporting on the war in eastern Ukraine, many people believe the region is now peaceful. The reality is, THE WAR GOES ON and dozens of Ukrainian soldiers CONTINUE TO DIE every month. Many also believe the government of Ukraine now provides their soldiers with adequate resources. Again, the sad truth is ‘our heroes’ needs are still not met.

As Viktoria Woronovych said: “These men are the flowers of our nation. Day and night they risk everything for their families, their neighbors, and an independent Ukraine. DO THEY NOT DESERVE OUR ATTENTION AND OUR HELP?”